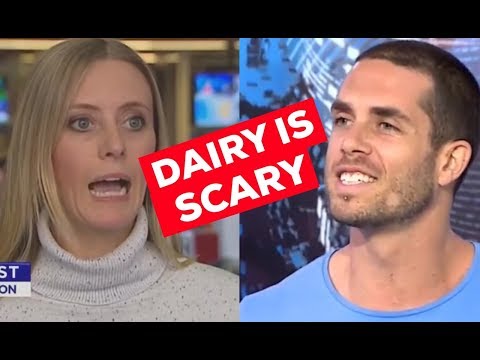 Dairy is scary AND scared | Plant Based News

Dairy is Scary: Veganism is growing and the dairy industry is scared. Sign up for vegan 2017 updates here – and be the first to watch the film: https://www.plantbasednews.org/signup

There has been a lot of talk about cruelty in the dairy industry this year.

Whether from personal accounts, media reports, undercover investigations, documentaries or otherwise – it has led to increased public awareness.

But what this short film is going to show, is that this new awareness has prompted an unprecedented response from the dairy industry, which has become in recent times, a deceptive and dangerous force.

The story begins at the start of the year, with two women on opposite sides of the world: one is Senator Tammy Baldwin in Wisconsin in the US. The other is Sandra Higgins in Ireland.

They represent a moment where two opposing ideas about the future of the dairy industry took hold.

Higgins launched a small billboard campaign against the dairy industry, which proved an extraordinary experiment, starting in Northern Ireland but quickly expanding worldwide. And by the end of July, no one could have foreseen how it would play out.

Meanwhile in the US, Senator Tammy Baldwin began a campaign against plant-milk. Baldwin introduced the Dairy Pride Act, which stopped non-dairy products such as soy or almond milk from being labeled milk, yogurt, or cheese.

So when last month, Plant Based News’ World Plant Milk Day was launched and the dairy industry began its own counter hashtag, the fate of the two hashtags was a fitting metaphor for the competing forces. World Plant Milk Day trended globally while Proud of Dairy achieved only a handful of submissions.

As milk consumption continued to plummet and dairy free cheese and dessert alternatives became more widely available, the dairy industry’s mission to retain its dominant position continued. The industry has been killing cows to inflate dairy prices and secretly funding studies that produce headline-grabbing claims about the alleged health benefits of dairy.

But the most striking example of the corruption is the dairy industry’s insistence on syphoning off large quantities of government wealth. For example in the US, big dairy, along with the meat industry take over 30 billion dollars from the US government in the form of subsidies each year.

And in Canada, despite their new draft food guide eliminating dairy, the government there is investing 350 million dollars into new dairy support programs.

It was another contradiction that made us question the actions of those in power. And the more we questioned this, the more we realised they did not care. The flaws in their system became more obvious to the World. And revelations came to light about the animal abuse.

Once a sideshow in the animal rights struggle, dairy has now become a key and central battle – and one the dairy industry is losing. Ag gag bills designed to cover up the horrors of the dairy industry in the US have been declared unconstitutional this year. And more recently, the Advertising Standards Authority in the UK ruled that you can legally state that “humane milk is a myth”.

Yet the misinformation continued. Especially in the mainstream.

And as increasing numbers become aware of the health benefits, plant milk is now more of a dangerous threat than ever before. As David Dobbin, chief executive of united dairy farmers said, there is a “demographic time bomb” as young people shun traditional milk.

But as the dairy industry funds more and more marketing campaigns, maybe the real time bomb and threat is the industry’s effect on the Planet, which along with the other agricultural industries, accounts for more greenhouse gas emissions than all of transportation combined.

★ SIGN UP TO RECEIVE OUR WEEKLY HEADLINES IN YOUR INBOX: http://www.plantbasednews.org/signup