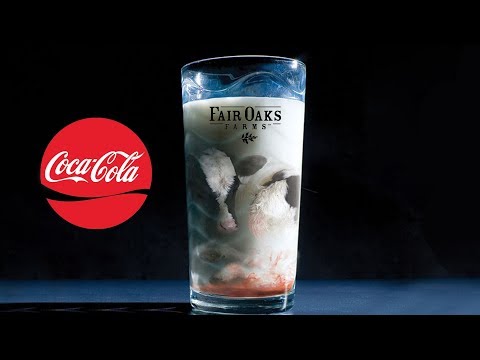 Undercover footage showing young dairy calves being kicked, violently thrown, having their heads stamped into the ground and suffering from heat exposure at a US farm known as the “Disneyland of agricultural tourism” was published this week.

“Calves can be seen struggling to breathe and are observed suffering by themselves within their hutches,” according to a report by Animal Recovery Mission (ARM), the campaigners behind the footage. “With temperatures reaching to as high as 110F [43C] in summer, dehydration and malnutrition are also possible factors leading to calves suffering and slowly dying at Fair Oaks Farms.”

Every year, more than 600,000 tourists visit the Fair Oaks Farms Dairy Adventure, a working dairy farm of 15,000 cows a few hours south of Chicago, Illinois. The farm, with its museum, restaurant and hotel – deemed the “Disneyland of agricultural tourism” this year by Food & Wine – sells a vision of quaint rural life: “It’s where families can view pastures dotted with dairy cattle” and “watch as a piglet is born” before they “top off this idyllic country day with a scoop of ice cream or a pork chop from Fair Oaks Farms’ restaurant”.

The farm is independently owned by veterinarian Mike McCloskey, but it is an affiliate of the Coca-Cola company, with which it produces a nutrient-dense milk product called “Fairlife” and other popular dairy products including Core Power Protein shakes. McCloskey, who co-founded the business with his wife, Sue, has stated that their farm provides in-depth training on humane care of animals.

ARM’s undercover investigator got a job at Fair Oaks as a calf care employee in 2018. The investigator reported that they received no training other than where to put the calves’ dead bodies. Furthermore, violence towards the animals appeared to be commonplace, typically stemming from frustration over the calves’ unwillingness to feed from artificial nipples.

Video footage captured between August and November of 2018 appears to show workers beating, kicking, and throwing the bloodied and emaciated baby animals as their mothers go hoarse calling to them from separated barns.

“Fair Oaks Dairy Adventure is really a smokescreen,” said ARM’s founder, Richard Couto, who added that a visit to the recreational site last year sparked his interest in launching the investigation. “It makes people believe that the dairy industry is something that it’s not. I knew that I was being lied to.”

In a statement posted on the company’s website, McCloskey attributed the cruelty to four of his employees and a third party truck driver, whom he said would have their contracts with the farm terminated. Three of the four, he said, were let go before the video was made public. He also said he was unaware that the male calves were being sold for veal.

“It is a shock and an eye-opener for us to discover that under our watch, we had employees who showed disregard for our animals, our processes and for the rule of law,” he said. “This ARM video shines a light on an area that – despite our thorough training, employee on-boarding procedures and overall commitment to animal welfare – needs improvement.”

Both the Coca-Cola company and Fairlife – a company also founded by Mike and Sue McCloskey – responded with online statements reaffirming their commitments to animal welfare and promising better oversight. Claiming that the farm featured in the video only produces 5% their milk supply, Fairlife has vowed to audit all of its producers and said that it will not accept milk from those found not in compliance with its standards.

Still, that’s not enough for Chicago-based grocery chain Jewel-Osco, which announced on Wednesday that it would drop any product associated with Fair Oaks Farms.

It’s also not enough for Couto, who wants consumers to stop supporting an industry that he sees as fundamentally broken. “We want to see felony arrests and people go to jail,” he said. “But what will that do for the animals at Fair Oaks Farms? For the rest of the animals in the dairy industry? – Absolutely nothing.”